The contribution of platform livelihoods to an inclusive digital economy in Indonesia: Literature review and stakeholder consultations

This report draws on 15 in-depth expert interviews and over 100 papers and reports to explore seven interconnected themes about the platform economy and digital inclusion in Indonesia. Our specific concern is platform livelihoods—the ways in which an increasing number of Indonesians rely on digital marketplaces and social media platforms to earn a living by working, trading, renting, and creating. As a whole, our research questions assess the state of the evidence and key unknowns about the scale, scope, and quality of these livelihoods, with particular emphasis on rural areas and the prospects for women’s participation in the platform economy.

What has been the impact of COVID-19 on platform livelihoods?

The COVID-19 pandemic was devastating to the Indonesian economy and to individuals seeking to earn a living. Lockdowns and lack of mobility limited the ability of many small enterprises to sell. The impact on platform livelihoods was therefore mixed. The ride-hailing sector suffered, leading some drivers to replace ride-sharing with delivery. Meanwhile, the pace of digitalization by MSEs increased, with significant jumps in MSE participation on e-commerce platforms.

Any 2021–2022 review must address the impact of the COVID-19 pandemic on the contours of the Indonesian digital economy. The shocks of the pandemic have changed the pace and trajectory of digitalization around the world. All of this study’s other animating questions—on scale, earnings, rural participation, DFS uptake, etc.—must be interpreted in light of the disruptions and changes brought about by the still-unfolding pandemic.

How many people have platform livelihoods in Indonesia?

There are many kinds of platform livelihoods—combinations of working, selling, renting, and creating. This makes it difficult to accurately count the number of people involved, particularly when individuals can a) use more than one platform, b) earn part time via a platform, and/or c) employ others to help them with their platform livelihood. There are several methods for enumeration: nationally representative surveys, analytic estimation, and (the approach used in this review) the aggregation of reports from individual platforms.

Evidence from a  2019 World Bank survey suggests at least 1.2 million Indonesians were involved in gig work, mostly in ride-hailing, transport, and logistics/delivery, and 13 million in varying degrees of e-commerce, particularly informal social commerce. More recent bottom-up figures from platforms are proportionally in alignment with these estimates, but they reflect a significant boost due to continued platform expansion and the pandemic.

Reports from the platforms do not distinguish between full time and part time workers and sellers. In gig work, we estimate at least 2.25 million active delivery drivers and ride-hailers. In trading, we identify 12 million e-commerce vendors, 9.3 million informal social commerce sellers, 1 million hyper-local merchants in food prep and rapid fulfillment, and 60,000 farmers and fishermen. These are four reasonably distinct, non-overlapping categories of engagement. In renting, we estimate 221,000 property owners, and in creating perhaps 7,000 high-visibility, high-earning creators.

These reports suggest that in 2022 nearly 25 million Indonesians earned at least some of their livelihood via online marketplaces and/or social platforms. Of these, as many as 4.5 million may do so exclusively. The exclusivity numbers are much smaller because many individuals have multiple sources of income and earn only fractionally from platform sources.

Nevertheless, a figure of 25 million represents approximately 1 in 5 of Indonesian workers. This degree of participation is clearly enough to merit continued attention from policymakers, technologists, and the digital development community. 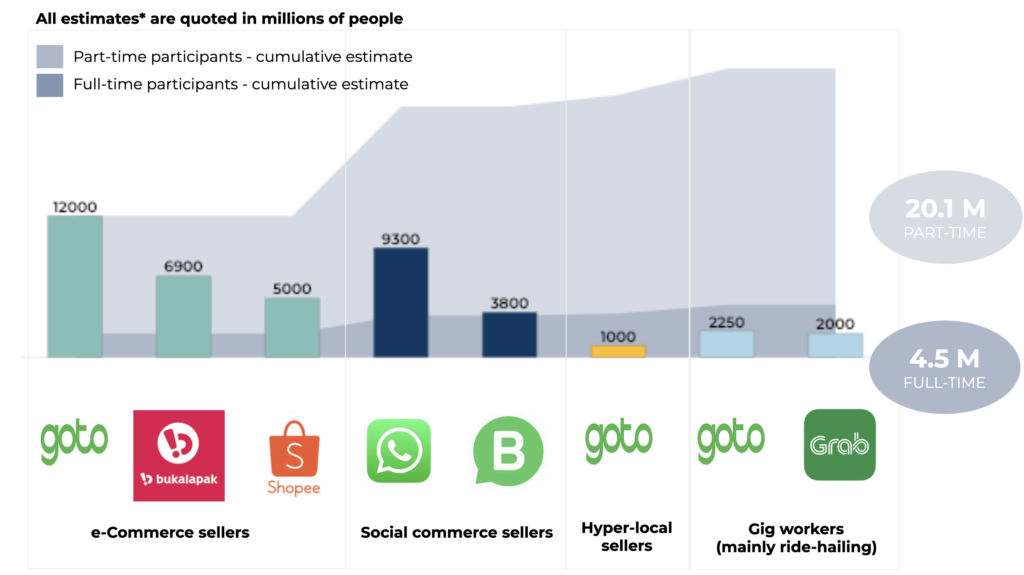 How much do people earn in platform livelihoods?

There are some studies of earnings, both of gig workers (particularly drivers) and MSEs (retail kiosks and merchants participating in the Grab and GoTo ecosystems). Studies conducted in partnership with Grab and GoTo have suggested there are significant upsides for drivers, in terms of access to and quality of earnings (above minimum wages). Other studies, from Rest of World/Premise, and from Fairwork, may calculate earnings differently and are not as optimistic about whether drivers can exceed minimum wage.

At this stage, the most cautious assessment of the question of earnings is still that “it depends”—on how time is calculated (including idle time), on vehicle costs, on whether drivers and merchants are full time or part time, and on whether one is considering averages or distributions of success. This measurement and assessment challenge is not limited to Indonesia, but is rather a part of shift away from paystubs and employment that comes part-and-parcel with gig work and platform livelihoods.

Beyond earnings, how do people experience platform livelihoods?

A few studies illustrate the factors and experiences, beyond earnings, that Indonesian platform workers (particularly drivers) have to weigh when deciding to enter and whether to stay in platform work. There are trade-offs in flexibility, health, and stress—in a workday driven by an algorithm and ratings—and in the low levels of protection given their status as contractors rather than employees. These are similar themes to platform livelihoods elsewhere in the world.

What are the challenges and advantages for women in Indonesia’s platform economy?

What are the prospects for platform livelihoods in rural areas?

It’s no secret that rural Indonesia presents challenges for the platform economy. A few studies, notably by Alpha JWC Ventures/Kearney, and Facebook/CSIS, deal specifically with the prospects for platforms to support rural livelihoods. There are significant infrastructure challenges, including electricity and internet access. There are challenges of inter- and intra-island transport that can also impact e-commerce. Lower density, purchasing power, and internet-readiness of customers also limit the attractiveness (and increase the cost-to-serve) for platforms of all kinds.

Despite these obstacles, there are some indications that platformization is growing in rural areas: e-commerce is serving rural consumers, there is some spread in ride-hailing (both by the major platforms and by some smaller players), and there is experimentation in the platform agriculture space. However, the next few years will be critical in developing business models and product/service sets that can appeal to rural customers and involve more rural households in platform livelihoods.

The short answer is “yes.” There is clear interplay between DFS and platform livelihoods in Indonesia. Research suggests many merchants in the Gojek ecosystem are using digital payments for the first time. Drivers, too, are at the front lines of cash-in and digital transactions and are encouraging many consumers (and other drivers) to switch to digital payments.

The situation is fluid, however, with regulatory changes to allow merchants to do cash-in-cash-out transactions and the potential that WhatsApp and/or other parts of Facebook may soon offer in-app payments and transfer support.

Our review of the literature and discussions with stakeholders surfaced four clusters of recommendations about how to improve platform livelihoods in Indonesia:

Looking across these recommendations, and across this review’s broad assessment of the overall state of platform livelihoods and digital inclusion in Indonesia, we offer these six conclusions:

There is a considerable opportunity for Indonesia to be a world leader and beacon of inclusive digital platform economies—but the policy, research, practice, and technology communities each have a role and must work together to bring this about.

Partners on this Study